On Ray Odierno (1954–2021); another travesty on campus; the morality of capitalism; the Saudis and British soccer; Superman’s status; and more

There was some sad news last weekend: “Raymond T. Odierno, a retired Army general who commanded American and coalition forces in Iraq at the height of the war and capped a 39-year career by serving as the Army’s chief of staff, has died, his family said Saturday. He was 67.”

I have quoted a report from the Associated Press. Here is some more of that report:

President Joe Biden lauded Odierno as a “hero of great integrity and honor.” In a joint statement, the president and First Lady Jill Biden recalled that Odierno spoke at the funeral of their son Beau, who served under Odierno in Iraq and died of brain cancer in 2015.

“Ray was a giant in military circles — dedicated first and always to the service members he commanded and served alongside,” the Bidens said, adding that Odierno and his wife Linda were advocates for military children and families.

Some more from the AP:

At 6-foot-5, Odierno was an imposing figure. He played football as a cadet at West Point and retained a lifelong interest in the sport. Army Secretary Christine Wormuth wrote on Twitter Saturday evening that Odierno embodied the values of West Point and of the Army itself.

And just a little more:

At a ceremony marking his retirement from the Army in 2015, then-Defense Secretary Ashton Carter described him as a commander whose tenacity and operational savvy gave civilian leaders great confidence.

“His commanding presence calmed the confused, and his courage and compassion helped carry the burden of loss and sacrifice,” Carter said.

I had the privilege of meeting Odierno once. It was in Iraq, at Faw Palace, where Odierno had his office. Faw had been one of Saddam Hussein’s pads. I was in Iraq with a group of journalists, finding out as much as I could about the war and its progress.

Here at National Review Online, I wrote a five-part series. Let me excerpt the final installment:

Odierno’s all soldier: tall, solid, imposing, bruising, Kojak-bald. He’s quite a sight. He could be the baddest grunt on the ground, except he’s got four stars on his shirt. (I imagine in the military they don’t say “shirt,” but forgive a civilian.)

An Iraqi flag stands in his office. The birds chirp — somewhat incongruously — outside.

In my journal, I memorialized our session with General Odierno. I recorded some of his most important points. Maybe I could paste the final few lines:

We have invested so much — so much. We have made significant gains, but those gains are at risk: “I hope we’ll be able to finish this and do it right.”

I chew over those words: “I hope we’ll be able to finish this and do it right.”

As we leave General Odierno’s office, he calls out to us, “Be safe.” Someone says, “You too.”

• By now, you may have read about Bright Sheng, the composer. A Chinese American, he is one of the leading composers of today. He teaches at the University of Michigan. Sheng was born in 1955, in Shanghai — so, he was eleven when the Cultural Revolution started. His family had a piano, which was important to the boy. The revolutionaries took it away.

This semester, Sheng was teaching a course on turning a play into an opera. (This is my understanding, from various news accounts.) He took as his example Othello. Verdi made an opera out of this play, of course, but so had Rossini. The two used an Italian title, naturally: “Otello.”

Bright Sheng showed his students a movie version of Othello, namely the one from 1965, starring Laurence Olivier. The actor is in blackface. Some students denounced Sheng for showing the movie, and instead of saying, “Grow up,” he apologized, profusely. He is no longer teaching the course (though he has not been fired by the university).

People have made remarks along the lines of “Bright Sheng faced a cultural revolution when he was a kid, and now he faces another one in Ann Arbor.” Needless to say, the consequences in China were far worse — involving torture, maiming, and murder. But you can see why the comparison occurs to people.

In 2015, I wrote an article about the issue of Othello/Otello and blackface. This is not a black-and-white issue, no pun intended (really). It is not clear-cut. If you’re interested in this article — a brief blogpost — go here.

• Radek Sikorski was in high dudgeon, and rightly so. He said, “We need to restore the moral basis of capitalism. The thievery exposed by the Pandora Papers has to stop.” To that, I said, “Amen.” This was on Twitter.

Someone responded, “Honest question: where might one read more about this concept of the moral basis of capitalism?”

I had three quick recommendations: The Roots of Capitalism, by John Chamberlain. Capitalism and Freedom, by Milton Friedman. And The Spirit of Democratic Capitalism, by Michael Novak. We could all add to that list, amply. Do you have other recommendations or favorites? If so, let me know at [email protected]. Thank you.

• You may know a song: “Come you not from Newcastle? Come you not there away?” The Saudi state does not come from Newcastle. But it is buying Newcastle United, the Premier League soccer club. Here is an article from the Financial Times: “Newcastle’s Saudi deal is shocking, not surprising.” Intriguing title.

Dictatorships and their representatives love to buy up entities in free countries and swan around in those countries. I think a brighter line — a much brighter line — should be drawn between democracies and dictatorships. I wish the good people of Newcastle would tell the Saudi state to shove it. Let them have bone saws, not sports teams in the Free World.

• I first knew Babi Yar as a symphony: the Symphony No. 13 in B-flat minor, Op. 113, of Shostakovich. It incorporates singers: a bass soloist and a men’s chorus. The symphony sets a poem by Yevtushenko.

Anyway, that was my introduction, many years ago, to this atrocity.

I wish to quote an AP report:

The presidents of Ukraine, Israel and Germany on Wednesday inaugurated a memorial center for the victims of the Babi Yar massacre in Ukraine eight decades after one of the most infamous Nazi mass slaughters of the Holocaust.

Nearly 34,000 Jews were killed within 48 hours in Babi Yar, a ravine in the Ukrainian capital of Kyiv, when the city was under Nazi occupation in 1941. SS troops carried out the massacre with local collaborators.

This museum, or memorial center, has a twist: It names the names of perpetrators — of the killers themselves, of whom there were hundreds.

• On October 1, Jimmy Carter turned 97. Think of this: He was born when Coolidge was president, about a year after Harding died.

• In a video, Congressman Madison Cawthorn (R., N.C.) said, “Look at David, look at Daniel, look at Esther — look at all the people who influenced the government of their day to uphold Christian principles.” Jeff Jacoby, the columnist, commented, “So that’s what those Jewish heroes of the Hebrew Bible were doing. Who knew?”

I thought of a line from The Music Man. Do you remember? “When a woman’s got a husband and you’ve got none, why should she take advice from you? Even if you can quote Balzac and Shakespeare and all them other hifalutin Greeks!”

• In Milwaukee, I saw a rally, a small march, along a major thoroughfare. A sign said, “My Body, My Choice.” I wondered, “Abortion or anti-vax?” Turned out to be: abortion.

• On that same thoroughfare, a sign at a fitness center said, “How’s your summer body looking? Mine’s looking like I have a great personality.”

• Have a glimpse at Milwaukee: 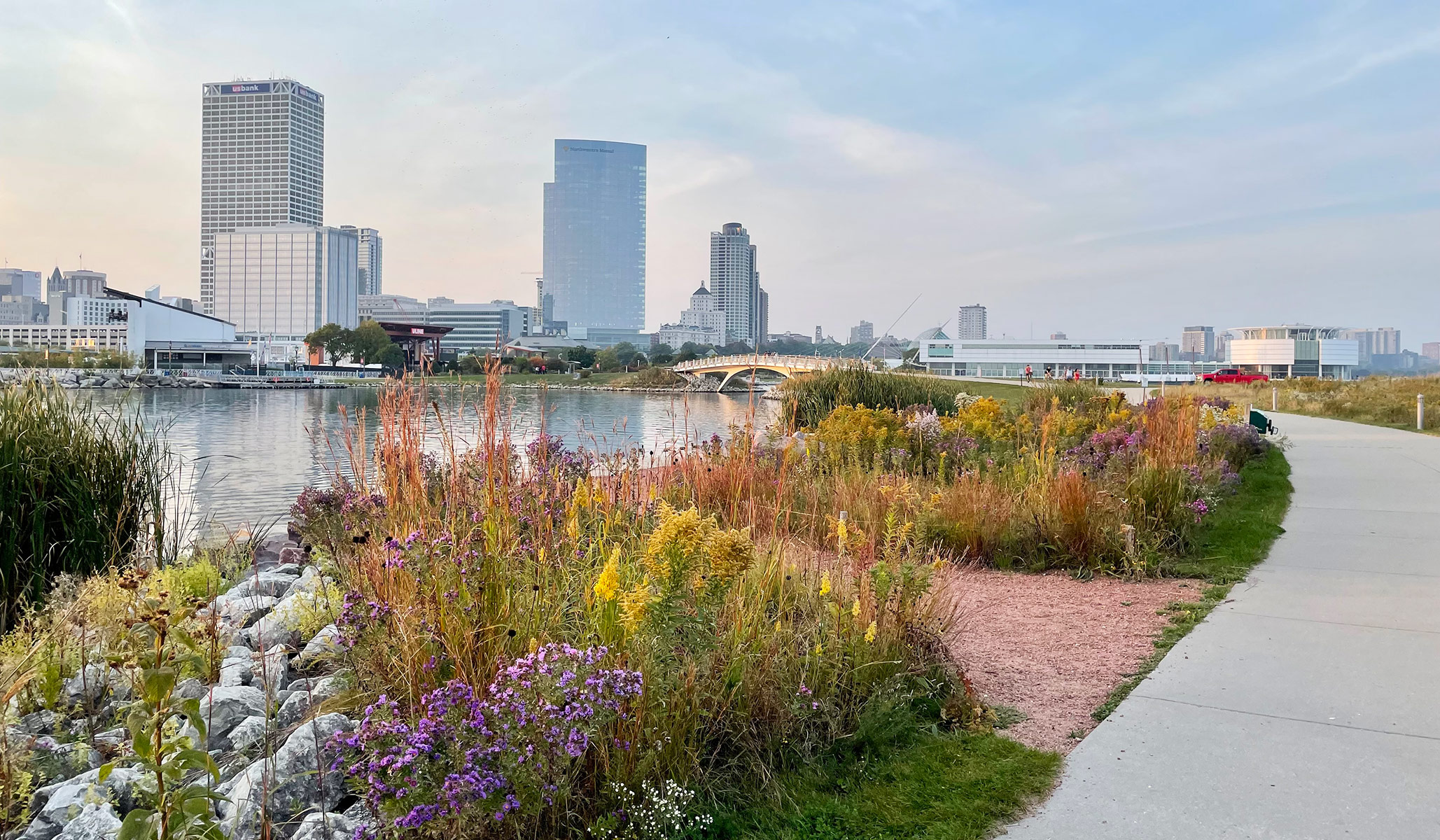 • Have another, looking east to my home state, Michigan: 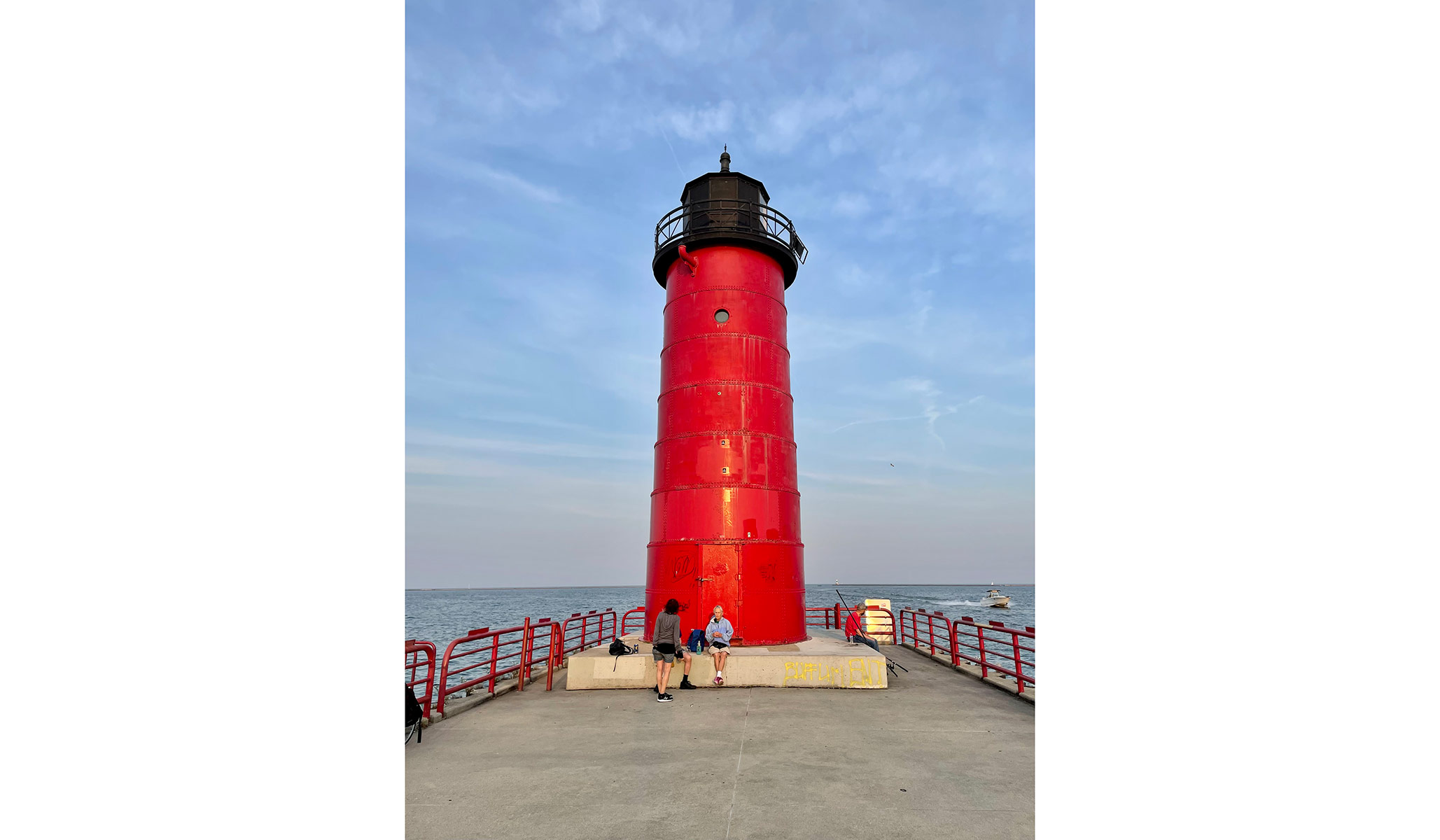 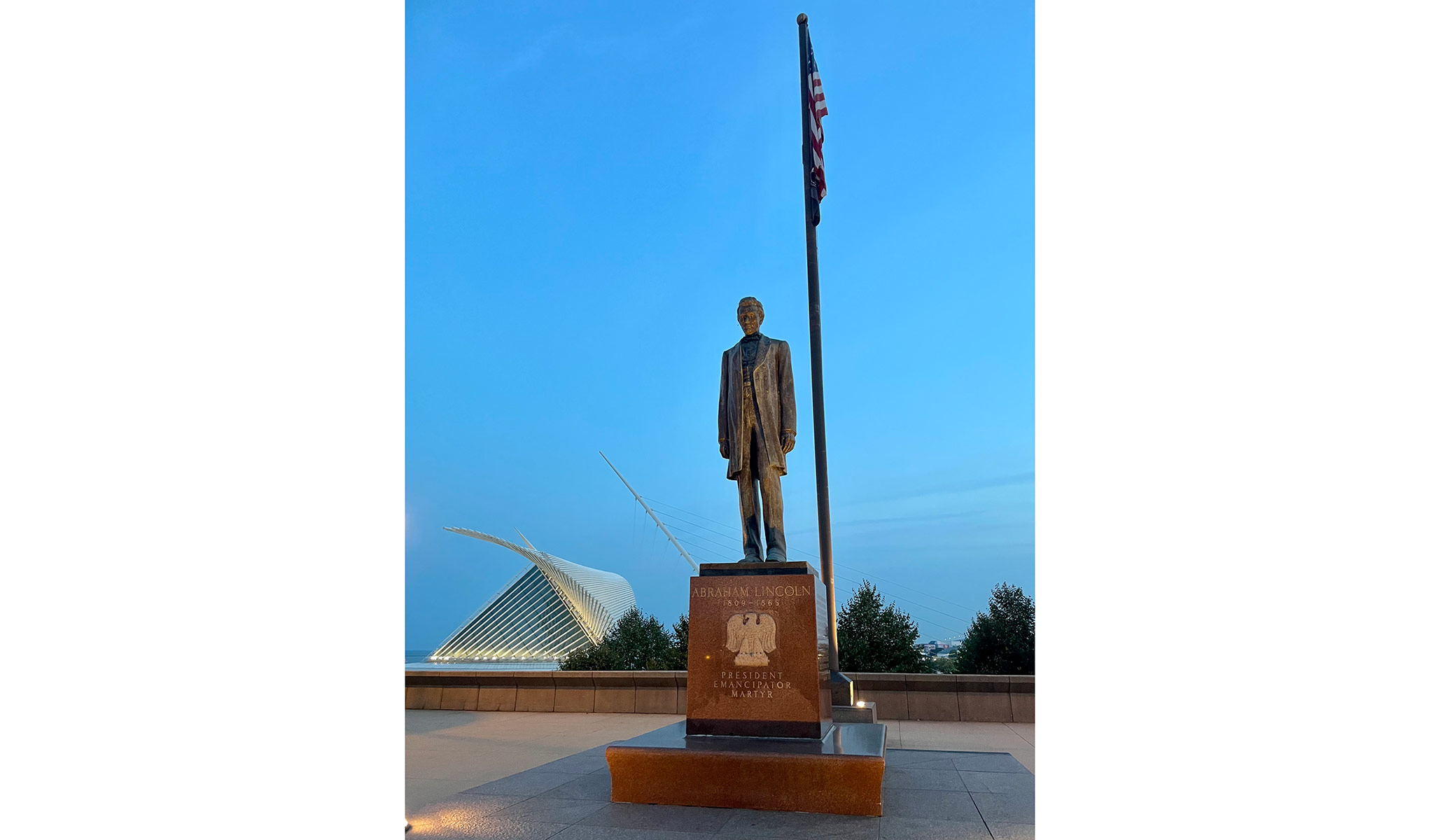 • And this, of course, is the greatest sign in all of America: what you see after getting through screening at the Milwaukee airport: 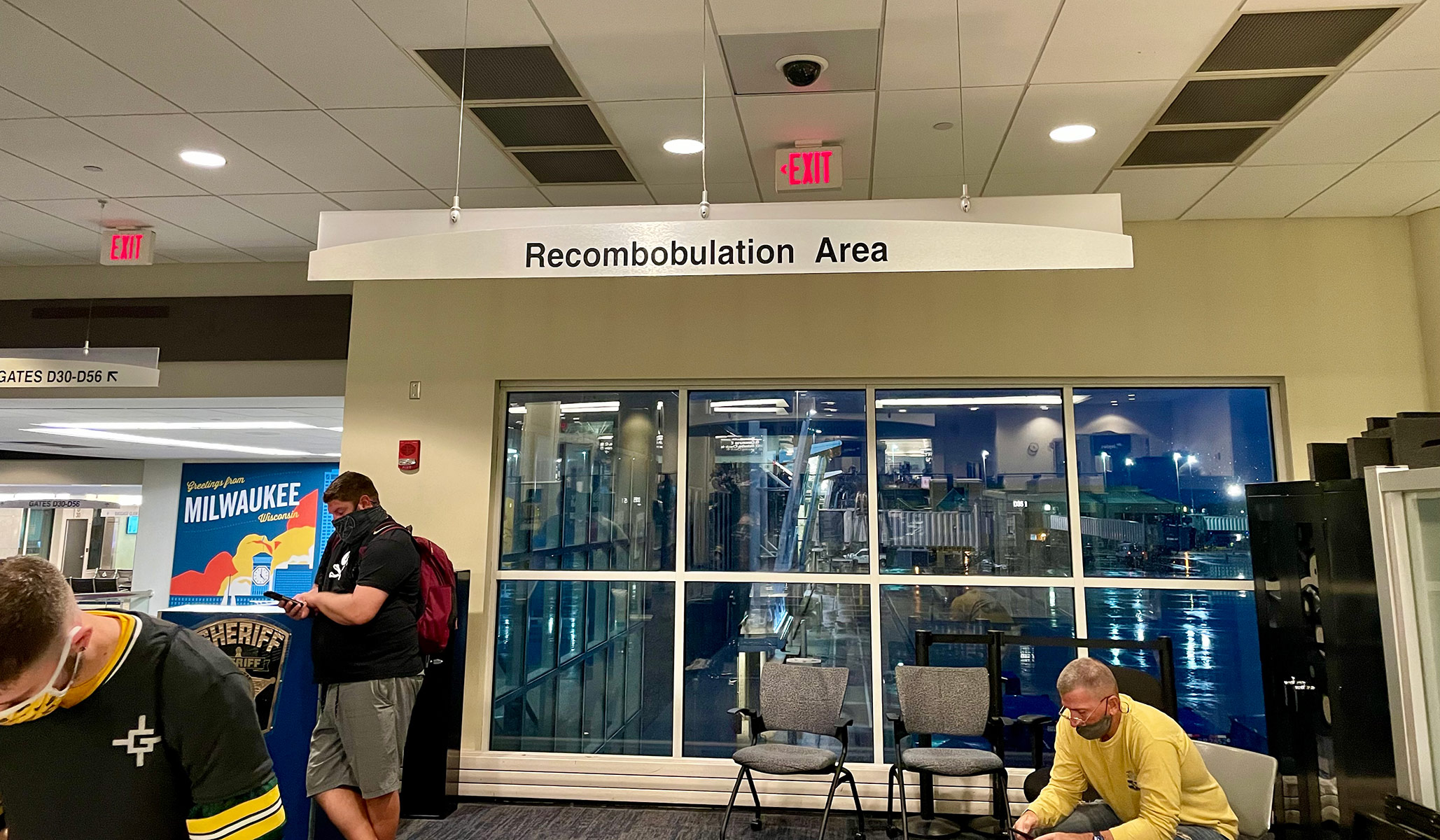 • Abolhassan Bani-Sadr was a big deal in our lives — American lives and the life of the world. He was president of Iran, the first president after the revolution. I seem to remember, from high school, jokes about “the Easter Bani-Sadr.”

He was a nationalist, and the mullahs quickly ran out of patience with him. He and they were out of harmony. Bani-Sadr fled the country and lived for the rest of his life in France. He has died at 88.

Stephen Kinzer, in his New York Times obit, quotes an historian, Ervand Abrahamian: “His tragedy [Bani-Sadr’s] sums up the tragedy of lay intellectuals who thought they could harness religion to nationalism.”

• A little language? A man I follow on Twitter said, “I just sneezed so loud I am half expecting to get some ‘God bless you’ tweets directed at me.” He then corrected himself, changing “loud” to “loudly.”

My dear friends: Remember that “loud” is an adverb as well as an adjective. Use it with great confidence, both ways! And if someone tells you otherwise — don’t listen.

• More language? It concerns the abbreviation of “tuxedo.” Most people, in my experience, say “tux.” But I have heard many — especially in or from the American South — say “tuck.”

• So, Superman is to be gay, or bisexual? (See the story here.) Insert your tights-and-cap jokes where you will.

• A little music? For a review of Jonas Kaufmann, tenor, and Helmut Deutsch, piano, in recital at Carnegie Hall, go here.

• Want something funny? On University Challenge, Jeremy Paxman read a question relating to Mexico. Its answer was “mariachi.” Paxo just doesn’t give a rip anymore — and he muttered, “They’re an incredible nuisance if you’re ever there.”

Oh, the liberty to be crotchety! (I’ve been exercising it since I was about four.) See you later.

If you valued reading this article, please consider joining our fight by donating to our Fall Webathon. Your contribution makes it possible for us to continue our mission of speaking truth and defending conservative principles.

If you valued reading this article, please consider joining our fight by donating to our Fall Webathon.

DeSantis Announces 20 People to Be Charged with Voter Fraud

DeSantis Announces 20 People to Be Charged with Voter Fraud